Right, time for another update on this as things have been progressing fairly well, but some of it seems to have been one step forward and two back!

First off, more back from the paint shop :D 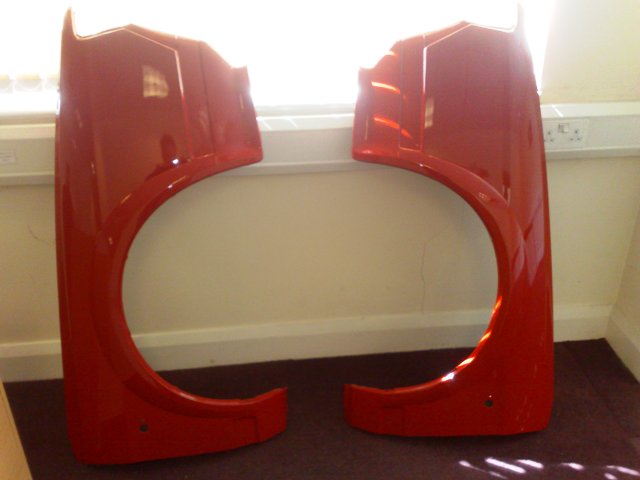 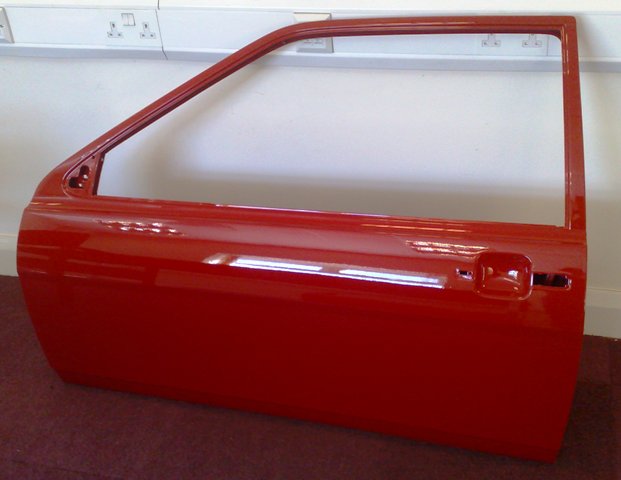 So to start putting it back together, the inner wings have been covered in Shultz and various seams and crevices have been waxoiled while there was nothing in the way. Hopefully this will help keep it from rusting! Anyway on with on with putting bits back on the car.

The brake linkage was first as i needed to run all new lines for it. The rear fleix's having never been changed in the car's 200k mile life stood little chance of undoing and there was some corrosion on the hard lines running under the car. While fitting the brake linkage, I managed to scratch my shiny new paint, cue a few choice words at my own stupidity and some more waxoil although I hadn't gone down to metal. The marks won't be visible when the engine is in place, just annoyed it took me so little time to damage it.
Anyway next was the steering rack, should be fairly straightforward as it was all ok when it came off I thought. Guess what, i was wrong. It turns out that my aftermarket steering rack and original UJ to the column were not as good a fit as they should have been. The UJ rocked on the pinion shaft splines even with the pinch bolt tightened up. Off came the rack and the track rods and boots were changed over to a spare VW rack that I salvaged off the replacement front end. No play in the steering now! 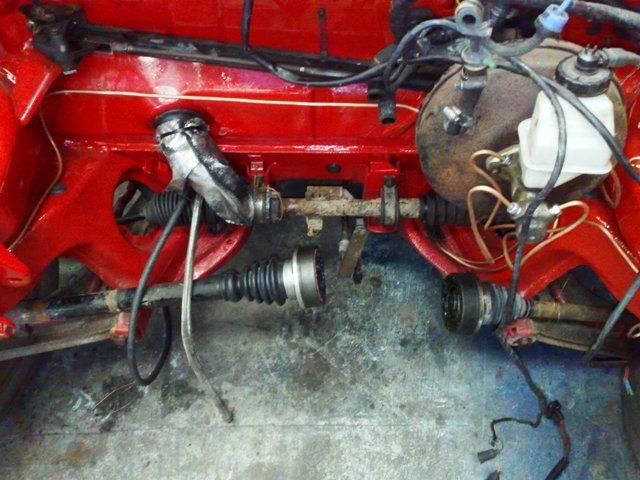 It's starting to look familiar again.

Fitted the other new inner CV joint to match the one I fitted before crashing the car. Pulled the wiring looms through from the fusebox and refitted all the rubber grommets and loom clips. I didn't count them but there were a lot! 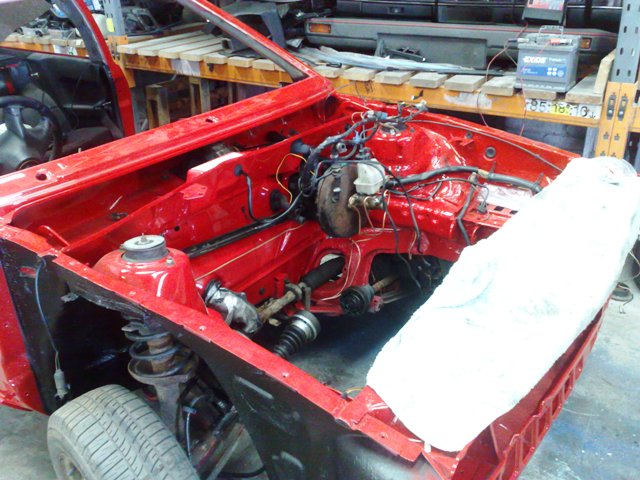 Lets reintroduce the engine to the party.

Nothing has been done to this in the time the car has been off the road, it's just been sat on a pallet in another building exactly as it was when it came out.

It needed cleaning up a bit, as oil got sprayed everywhere because the oil filter got bent. The gearbox needed replacing because it was leaking oil and the dif bearings were whining. Decision time, what gearbox to use, I had an O2A that I pulled from a Seat Toledo 16v a few years back and is cable clutch, or an O2O from a mk3 Golf 8v. The golf box won for the sake of an easy life at the moment although I do have mounts for the O2A into a mk1 chassis. 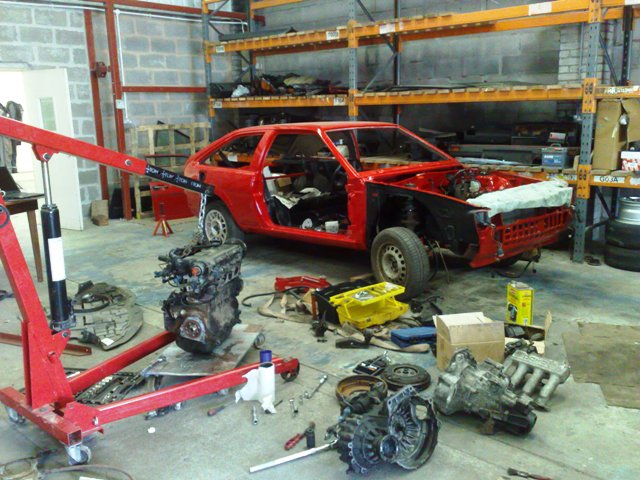 New crankshaft oil seal going in as I had to change the clutch to fit the input shaft of the mk3 gearbox. 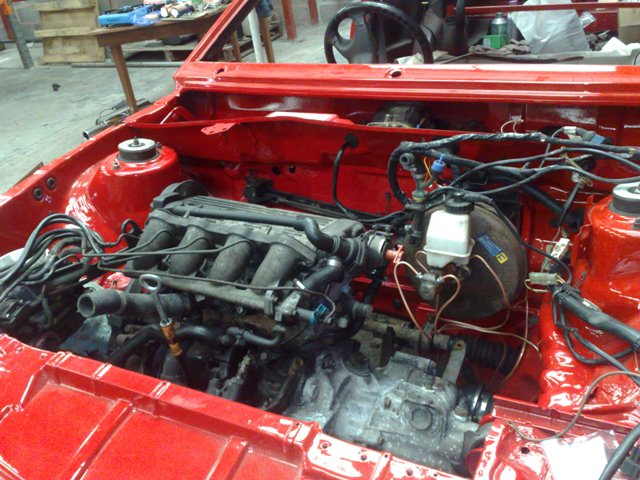 The engine went in very easily, shame I had to pretty much remove it again the following weekend to refit the alternator bolt which I'd forgotten to put on. It wasn't so easy to get back the second time around. 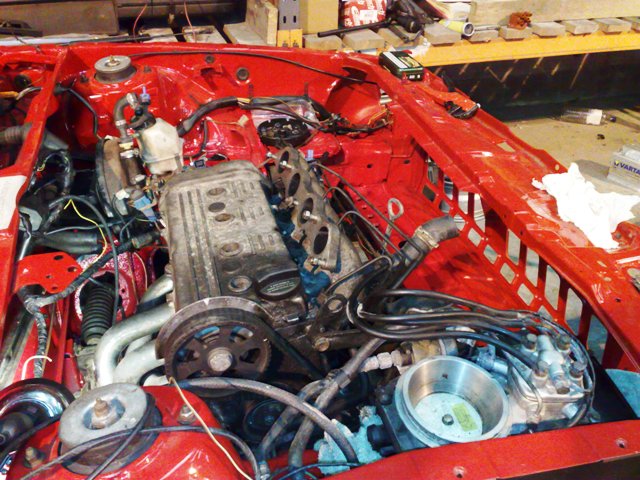 That was the progress up until the start of last weekend.

Plan for the weekend, get the engine running.

The engine is all now wired up, exhaust system is hung, radiator is fitted, fuel system connected up, oil and coolant filled up and the instrument cluster plugged in.

Ok, time to attach a battery and cross fingers. No magic smoke, turn the ignition on and still no smoke, looking good. Primed the fuel and oil systems then had a go at starting her up. Result.... a big fat no start. Realise that the fuel pumps aren't running and there is no spark when cranking. I'd only forgotten to plug the ECU in! (Muppet) Had another go and still no fuel pumps running or spark, tracked this down to the hall sender in the ABF distributer I'd fitted not working, quickly swapped this over and she ran!

I though, but celebration was shortlived, the braided fuel hose running up the back of the engine bay to the filter gave up after about 5 minutes and a large puddle of petrol appeared very quickly. Killed the ignition and reached for the large fire extinguisher nearby, fortunately it wasn't needed, so I now need to strip the fuel lines off the car and get them remade in something that will stand Kjet pressures.

Still plenty more to do,
Get the engine running again
Get a new headlining before I can get the glass and interior back in.
Refit bodykit and panels once I've stopped messing about with mechanical stuff.
Get some paint defects sorted and the whole thing mopped.
Get a VIC organised.
MOT, tax and insure
Drive and enjoy for the summer I hope. I want to try and get this finished for the end of May.
Last edited by Tim_R on Sat Oct 05, 2013 9:18 pm, edited 1 time in total.

This is looking good -

So last weekend was try and get as much re-attached to the car as possible as I'm having to move workshops very soon.

The interior has been refitted, a nice crack free dash which I'd had sat about for ages to put in place instead of my old one. (I got it for free years ago). This should have been easy with no doors or glass in the way but discovering the dash had been bent when removed. Whoever took it out didn't know about the screws behind the glovebox and had pulled hard.

Anyway, soundproofing, carpets, dash, centre console, undertrays and seats all went back in. 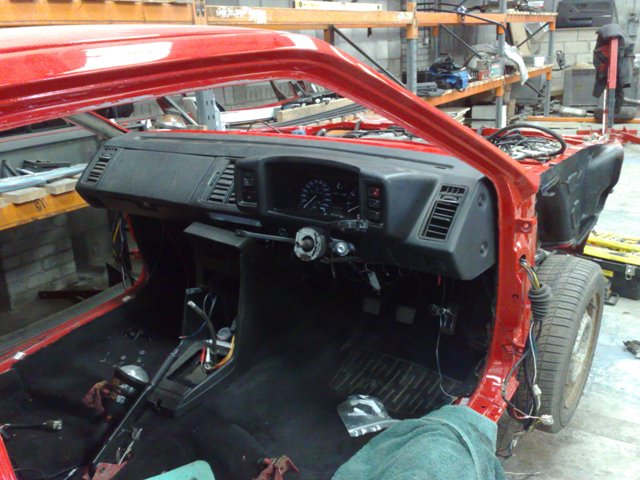 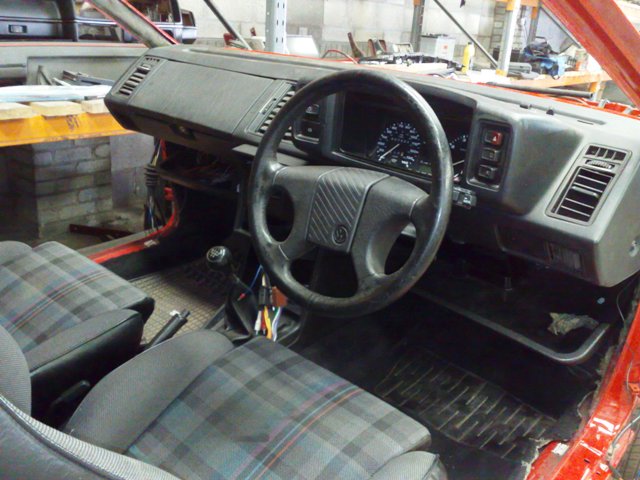 Really looks like a car again now. A few things will have to be redone at a later date that I'm not happy with but can live with for now.

All the fuel lines from the high pressure pump under the car forwards have come off the car to be remade, should have done this previously but knew I had a workshop move looming so had other priorities.

The 4 branch manifold has come off the engine so the rubbish fit of the joint at the 2 to 1 collector can be addressed and leaky joints welded. Don't buy the cheap 16v Raceland ones on Ebay, they haven't jigged the flanges correctly onto the 4 primaries so it'll either line up on the studs on the head and the 2 to 1 collector won't fit on or fit that first and it doesn't line up with the studs in the head.
Last edited by Tim_R on Sat Oct 05, 2013 9:19 pm, edited 1 time in total.

Head of Complaints - Big Pie Cartel
If it sounds like it's naughty, it probably is.

good effort, definatelly woulda cleaned up the motor before puttin it in that nice shiney shell though

Thanks for all the comments, it helps with the motivation. I want to try and make at least 1 show this year. I do have plans to make the engine look smarter but not decided which inlet manifold to use. I've got a KR 50mm one sat about as well as the original 42mm one currently fitted.

Didn't get a great deal done this weekend due to having to box everything up to move workshop and other commitments. Managed to spend half of Friday attaching component Rocco to it's shell so there was less to move though. 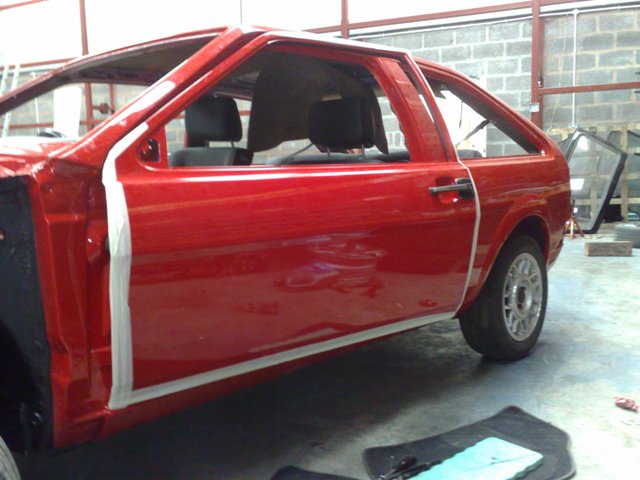 Several layers of low tack masking tape to protect the edges while fitting the door and getting the shut lines right. 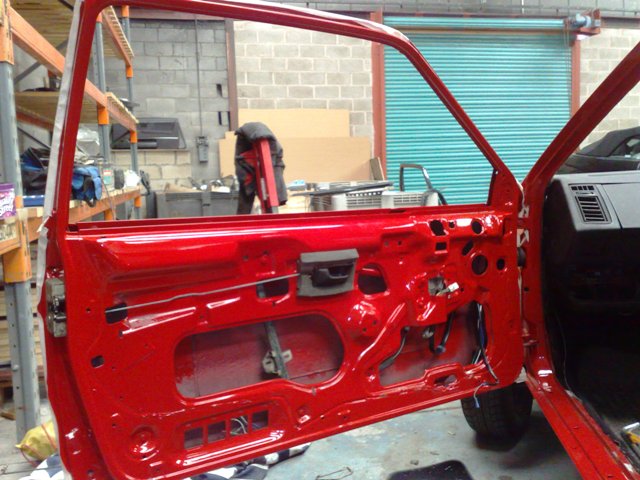 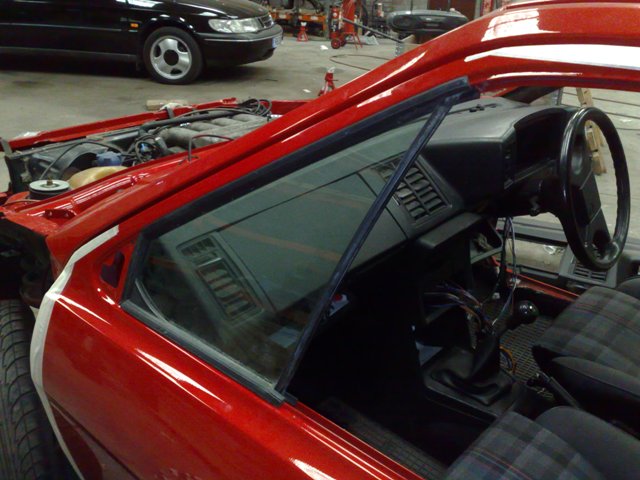 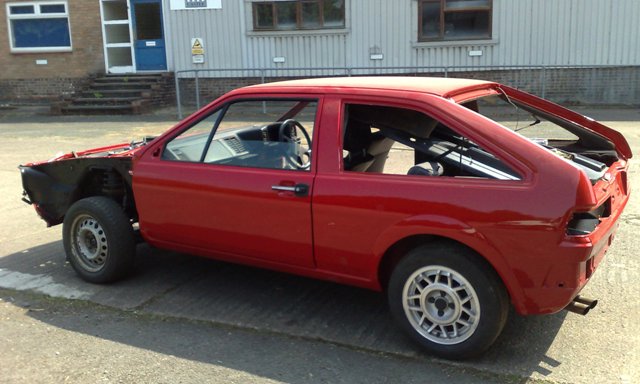 Wheeled out into the sunshine for the first time in a while and found a few small areas the paint shop will need to fix and a small bit of rust on a rear window aperture which will need to be sorted.
Last edited by Tim_R on Sat Oct 05, 2013 9:20 pm, edited 1 time in total.

Tim_R wrote:Thanks for all the comments, it helps with the motivation ...

Providing some of your own there too fella ... just trying to imagine Project Poppy when she gets to that stage. Useful idea about the low tack tape.

Tim_R wrote:Thanks for all the comments, it helps with the motivation ...

Providing some of your own there too fella ... just trying to imagine Project Poppy when she gets to that stage. Useful idea about the low tack tape.

Another handy hint when gapping up doors is to make sure that they have all the windows and winder mechanisms al least placed in them before setting shut lines - it's amazing how much weight they add to a bare doorshell, which in turn makes the door sag when at full weight!

Good work on the front end!

Rocco Horror wrote: Another handy hint when gapping up doors is to make sure that they have all the windows and winder mechanisms al least placed in them before setting shut lines - it's amazing how much weight they add to a bare doorshell, which in turn makes the door sag when at full weight!

My plan was to build them up and revisit them if needed. Strangely the passenger side one doesn't appear to have dropped even after adding the glass, electric window mech and central locking back in.

I didn't really get much done on the car this weekend partly due to making the new man space suitable for working in, partly because the enthusiasm just wasn't there.

Anyway, new fuel lines were made up on Saturday morning by a local hydraulics company. Solid lines still run under the car from the pump, but stainless steel braided flexis to run up the bulkhead and around the engine bay to the fuel filter and metering head for supply and return feeds.

I want to find a smaller filter suitable for Kjet as the original Corrado spec one is taking up too much space and I want to put it somewhere tidier. In the lead seems to be mk1 golf/scirocco 8v filter, which according to the Fram online catalog is 136mm tall by 64mm wide vs the Corrado's 176mm x 88mm. Seems this was used on a large number of cars from different manufacturers who used KJet, but if anyone knows of anything smaller...?

Sunday afternoon got the hard fuel lines fitted under the car, I really hate that job with the ARB in the way! Other small fiddly jobs involving clips and pipes or cables were ticked off and the driver's door hung. The easiest way I found to carry it across the industrial estate? Balanced on my head!

think i've still got some iveco ones in the back of me transit. they're about 8" diameter and 14" long. let me know if you want one

seriously impressed! I wouldve cried and sulked for years if that happened to my old gruffalo.