I'm writing this thread really to document the rebuild of my car after writing it off back in January 2010. While I don't think I'm too far off the actual putting back together stage, having a scirocco I can drive still seems a long way away and I'm missing it! This rebuild would not have been possible without the help and support of a couple of very good friends.

A quick bit of background, I bought the car as a student back in 2002 and set about learning about car mechanics, how to wave goodbye to cash at the motor factors and yet still have multiple breakdowns. When i got her she had about 80,000 miles on the clock and still felt like new inside.

My car as it was a few years ago, the photo was taken on a No-rice Guildford to Brighton run. 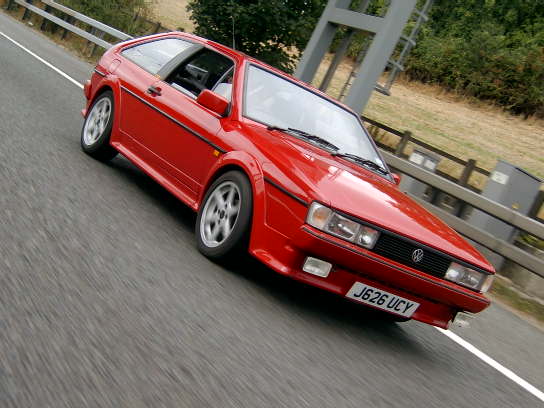 This is how she looked one wet rush hour Friday morning in January last year after setting off to a rolling road tune up. I had to be towed off the roundabout by friends due to dumping most of my oil, later found to be a bent filter. The radiator was fine! 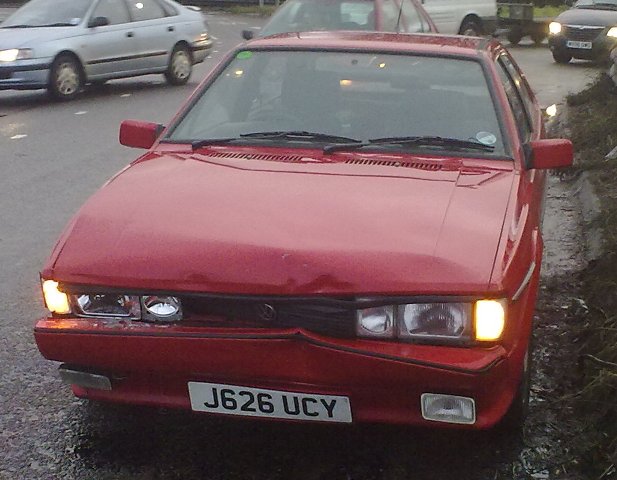 Once she'd been recovered home (thank you breakdown insurance) the battle with the insurance company started and 6 months went by. Some money in my pocket and keeping the car was the target. The payout wasn't great as the assessor wouldn't budge much on price because of the 200,000 miles on the clock.

but I got to hang onto the car and a few hundred pounds after the joke that is excess and salvage!

Come the summer and a friend securing a large workshop and storage area my car moved off the parents driveway much to their relief. I also started hunting down parts that were needed, after some haggling with a breaker's yard, this was collected. 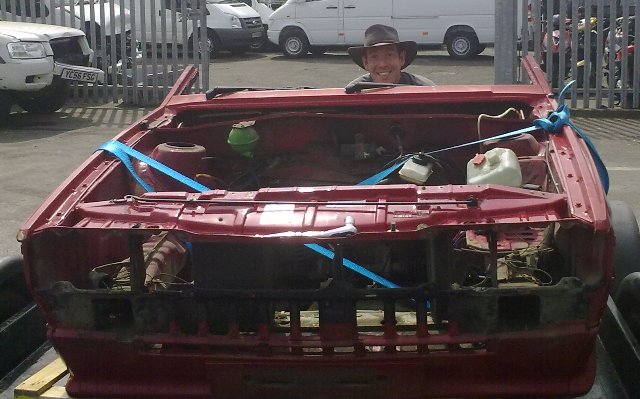 One muddy but straight and rust free front end replacement, sadly the driver's side wing and bonnet were scrap due to dents and holes for a bonnet ornament (why would you?). A brand new genuine VW bonnet was found on ebay for not a great deal of cash, the only problem was it was in Newcastle upon Tyne and I was in Bristol. The seller did offer to courier it but I was worried that the bonnet would arrive with a big dent in it and only be fit for scrap. So a road trip it was, a friends Audi estate was borrowed after applying a beer bribe and the bonnet was mine, also managed to combine the trip with collecting a good drivers wing from the midlands.

So there was a basic plan, pull it as straight as possible, chop out the bent bits, attach the new straight bits and paint. It all sounds so simple put like that!
Last edited by Tim_R on Wed Apr 24, 2019 8:26 pm, edited 2 times in total.

So after collecting parts the stripping commenced. Off came the bonnet, wing, bodykit and bumper and out came the engine and gearbox. 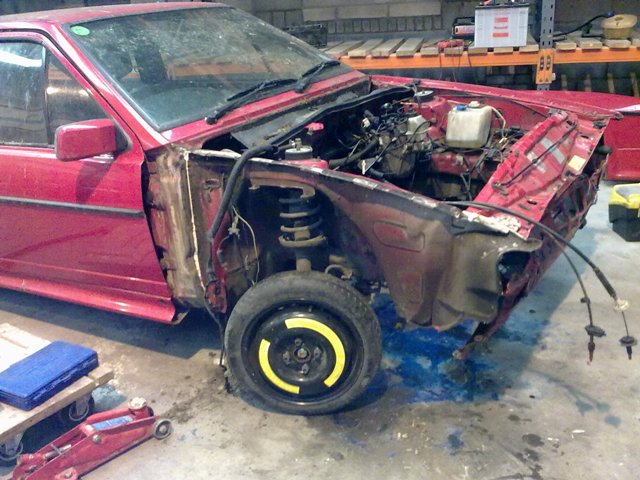 Then suspension and start cleaning up to check the damage before trying to straighten it out. 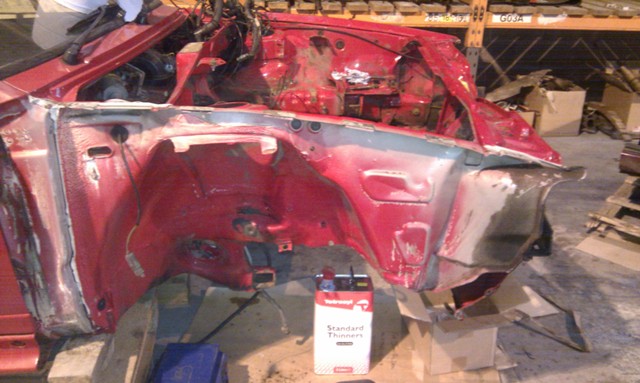 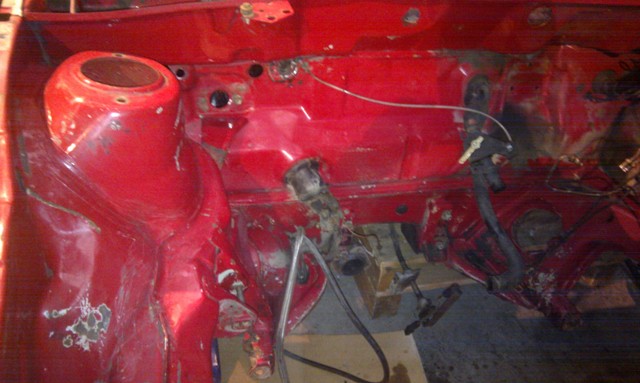 Seeing as the engine is out and the bay needs painting it was a opportunity to properly fix the bulkhead where the clutch cable had pulled through years before and a repair plate attached. 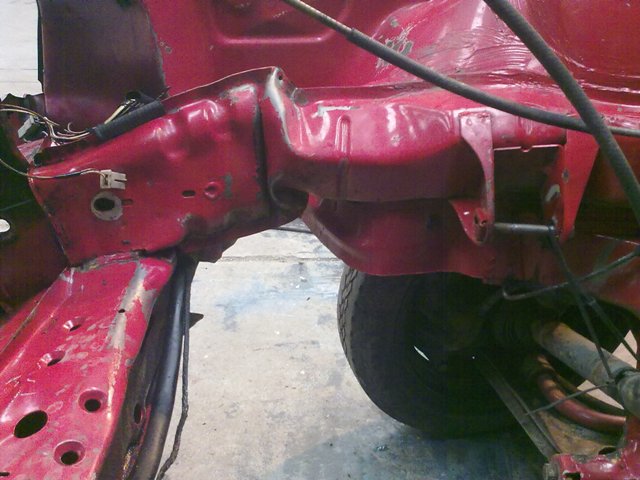 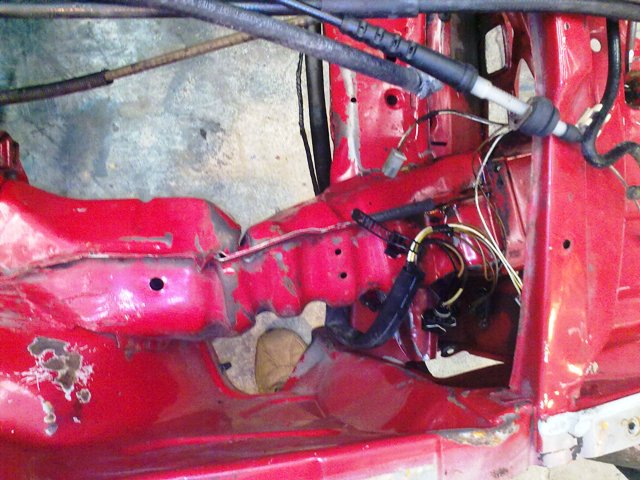 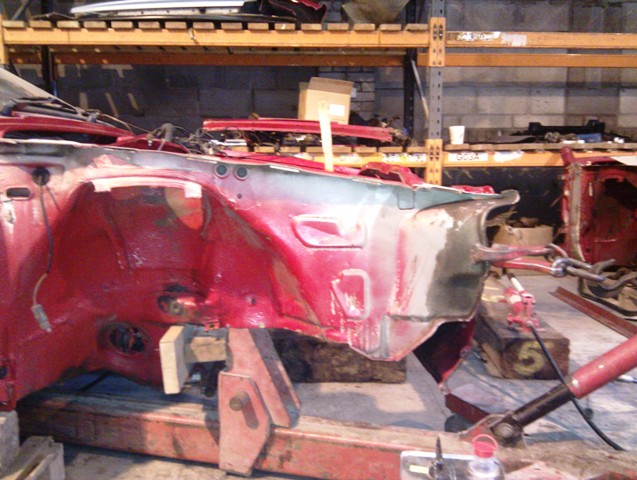 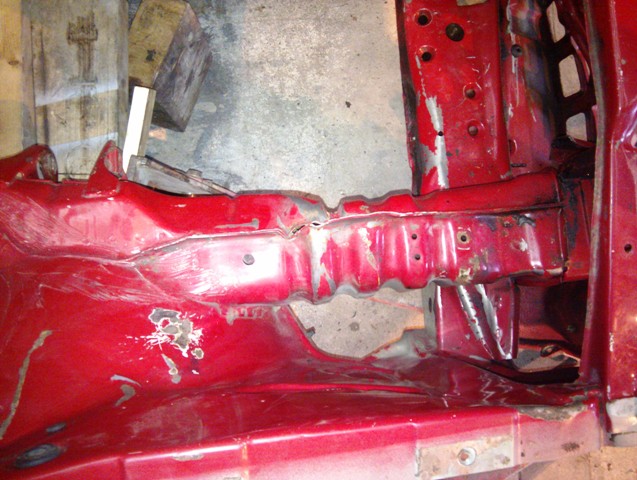 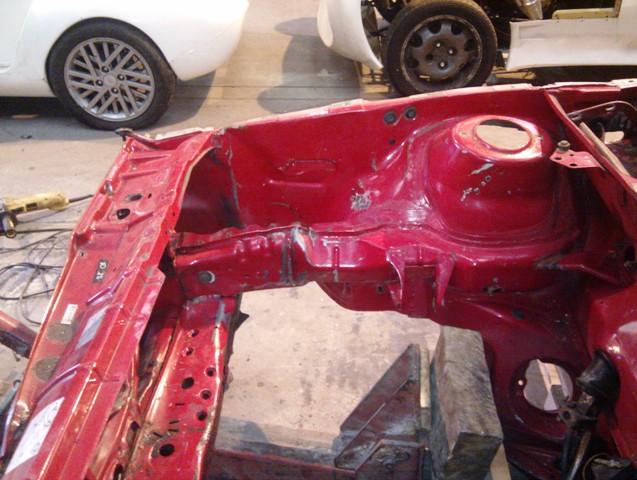 After all this there was a lot of cleaning, stripping back of underseal waxoil and seam sealer and drilling out spotwelds, on both the crashed and replacement front ends. There were several weekends of work without much to really show for it and the feeling of "what have I taken on" was starting to take hold!

But after a some advice and then a lot of help from another VW nut and bodyshop/restoration guy Barry we ended up with this! 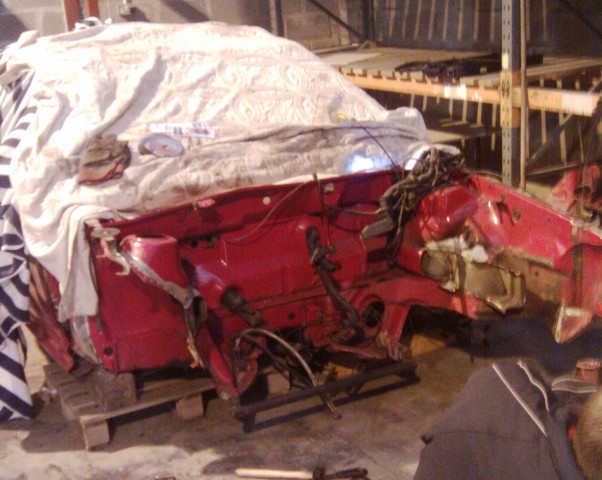 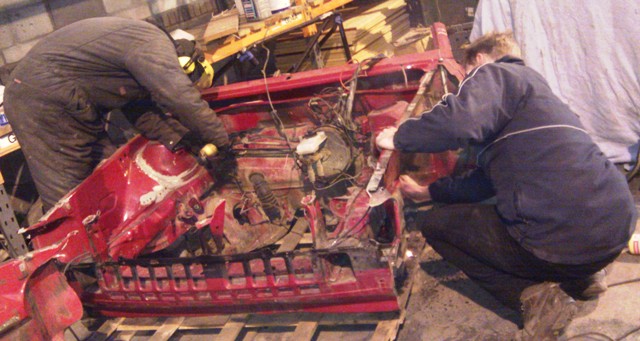 Now THAT is commitment!! Looking forward to the progress on this mate, top banana so far!!

And to think there are some that have questioned if I'm mad trying to resurrect Poppy!

Can't wait to follow your progress on this one ... all the best of luck with it!

To be fair, I've been questioning my own sanity at times during this and wondering why the hell I didn't just reshell all the good bits into another car! But also I'm using the rebuild as a chance to fix other things that needed attention or I wasn't happy with.

Yikes, thats a serious amount of commitment youve got!! Good luck with it Tim

Good things come to those who wait!!!!

Great to see you're piecing her back together Tim, should be a doddle for you

Cpt Custom wrote:And to think there are some that have questioned if I'm mad trying to resurrect Poppy!

I think his requires less work.

Thanks to everyone who's replied so far, as promised more photos although some parts aren't well documented. 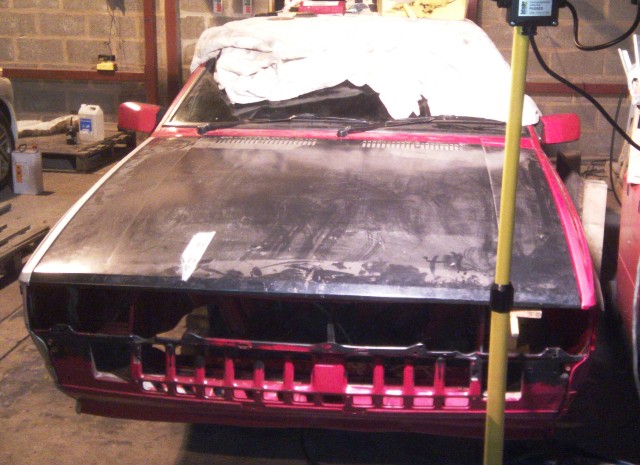 This was the sight that greeted me when walking into the workshop one Monday evening just after new year, it looked like a car again! However at that moment in time the front end was held together with self tappers to allow adjustment to get everything to sit right and panel gaps straight. Still plenty more to be done then.
I don't have any photos of the welding and shot blasting showing the front end being attached properly, but it's probably fair to say the front end is stiffer now than when it left the factory.
All the areas that had any signs of rust were shot blasted, wiped down and sprayed with etch primer to protect them from the moisture in the air very quickly. The shot we used was fairly aggressive and had a high iron content which would cause visible surface rust within hours if left.

So what to do next? Get the engine bay and front end painted and the car put back together before the MOT ran out on my 205? As this was a anniversary of crashing the rocco it had a certain appeal and I really wasn't sure if the 205 would scrape another MOT or fail on a mass of small issues that had built up through neglect and being French. As it turned out it only failed on handbrake efficiency and leaking exhaust so no need to rush the rocco back onto the road.

As there was no hurry there I figured I may as well get some other parts of the car cleaned up and painted. The windscreen aperture and A pillars needed matching to the rest of the car because I'd had the screen changed back in 2009 and needed to put paint on bare metal where the seal had rubbed. Rattle cans to the rescue, it wasn't a good colour match but prevented any rust starting. While doing that job rust was found hiding under the plastic strips on the roof, I couldn't afford to do anything about it at the time so just had to dry it out and cross my fingers, so that needed doing. I also needed a replacement driver's door as mine was rusting through just under the quarterlight for some reason. If I was going to do that then the bodykit may as well come off to check under it for anything and sort it out as well before repainting the entire thing!

A door and a set of green tinted glass was bought from MarkH and collected last weekend. Seeing as there was no way that lot would fit nicely in my 205 I borrowed another friend's T4 Caravelle (he offered while sat at the bar enjoying a pint!) and went on another road trip.

Meanwhile friends were busy in the workshop stripping back the rest of my car to get it ready to go in the paint shop last Monday and my car looked a bit like this but with doors and bodykit still when i walked into the workshop on Saturday afternoon. 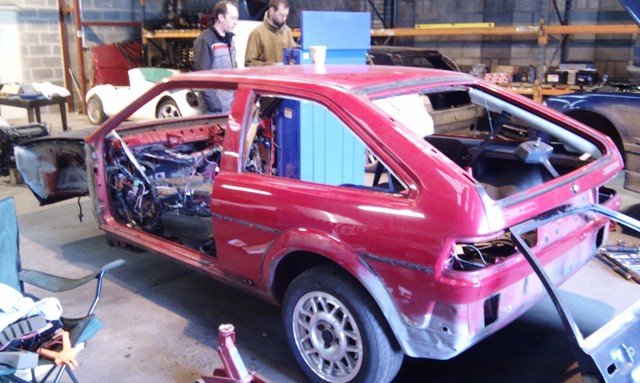 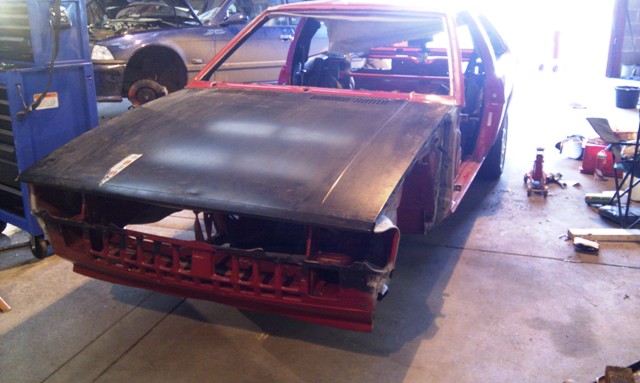 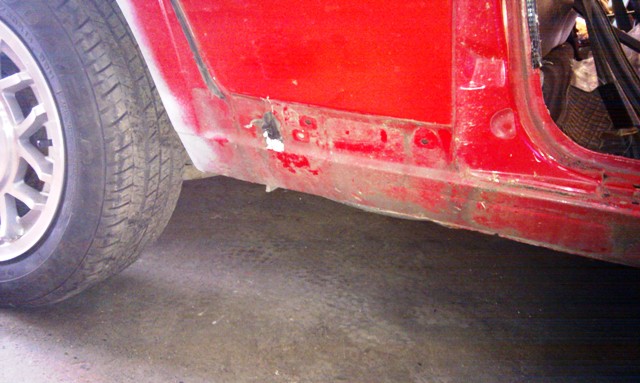 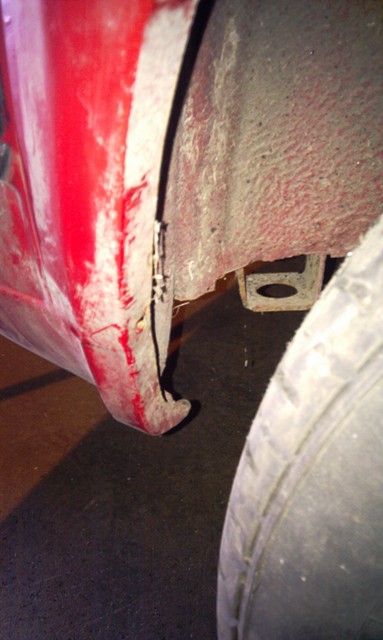 First arch off and looking good, emptied a large amount of mud out that had somehow got in down by the sill. 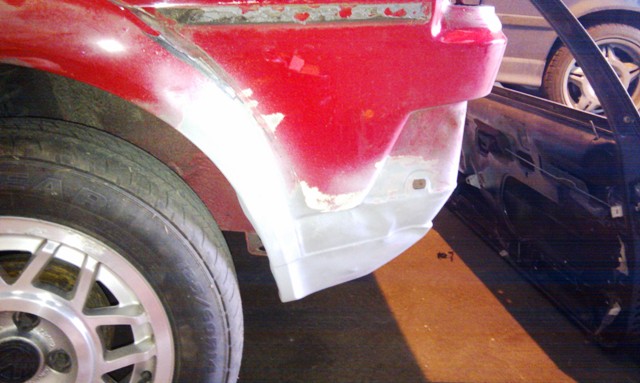 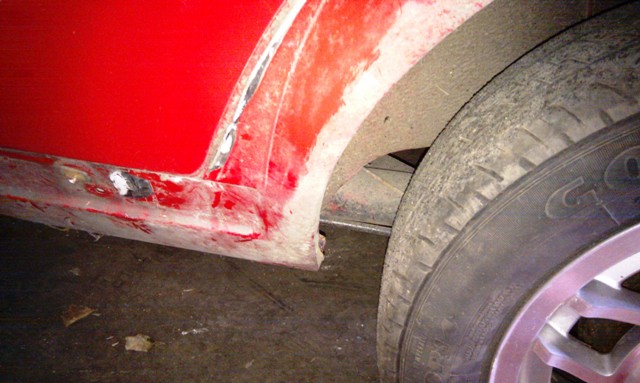 The second wasn't quite so good and due to previous accident damage that hadn't been repaired properly, but again was nothing serious and no welding required. The photos above were all taken after shot blasting and etch priming so make things look worse than they were.

Rear valance is clean and straight. 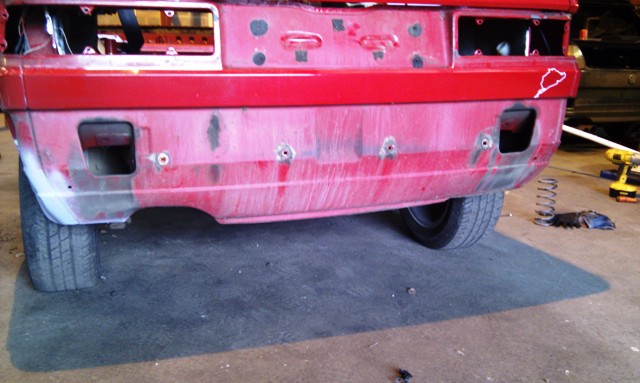 So this is now pretty much up to date, this week the shell is in the body shop, seam sealer being applied in the engine bay followed by painting, paint and underseal to the wheel arches and the rest of the shell being sprayed one matching tornado red colour for the first time ever in my 9 years of ownership.

The doors, bonnet, wings, bodykit and mirrors should all be going in next week if life goes to plan. After that it's "refitting is the reverse of removal" time as the manual says, I wonder if i can remember where it all goes?

Hey Tim, good to see the old motor coming back together.

You are clearly a mentalist. I commend your misguided enthusiasm. Well done.

the edmundator wrote:You are clearly a mentalist. I commend your misguided enthusiasm. Well done.

Why thank you but I can't claim all the credit, I'm only part mentalist. The measuring, cutting and welding I've watched from a safe distance and now owe the friends who are mad enough want to do it for fun as it were quite a lot of beer. I've mostly done the dismantling, cleaning, scraping underseal off and rubbing down type of jobs.

Just a quick update on this, not really a great deal to add other than extremely red and very shiny!!!

Waxoil and shultz will be applied to engine bay and wheelarches and reassembly can begin while doors, bonnet, wings and bodykit get painted. 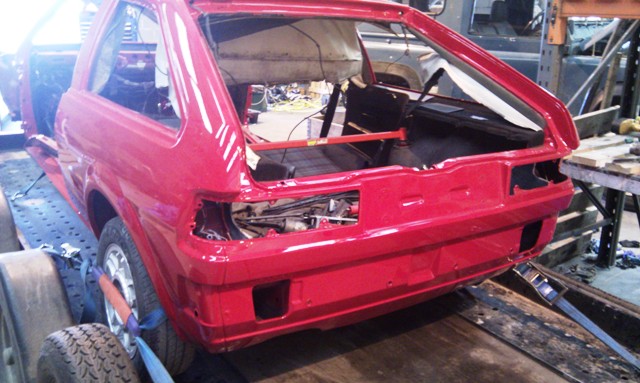 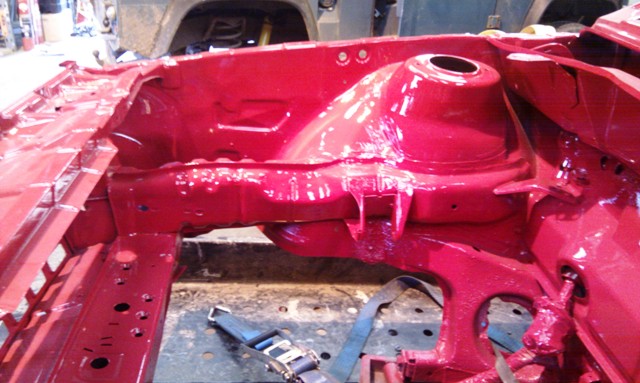 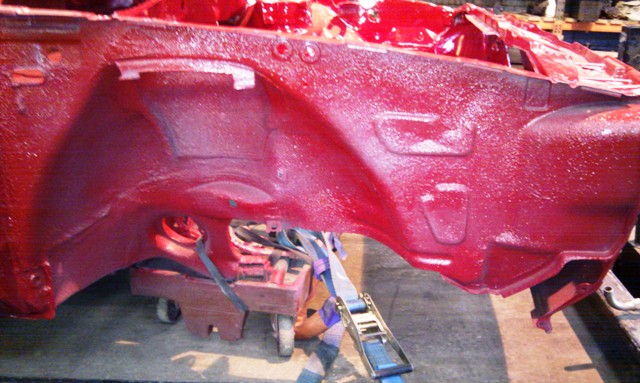 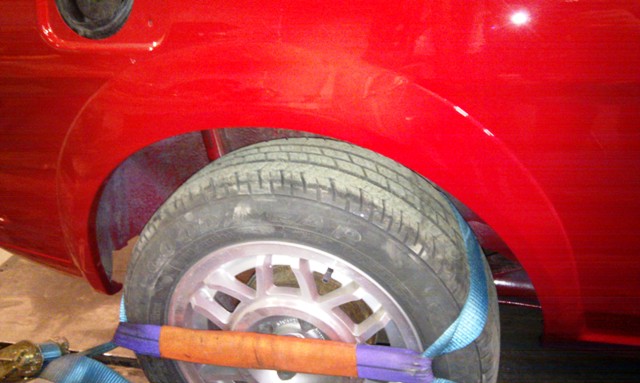