All digits are being crossed for tomorrow as I've got the VIC booked for 11.20 at Avonmouth. Hopefully after a successful check, I can go straight to the DVLA office in Bristol and get my rocco taxed and actually use it!

VIC test is really straightforward, all they do is check the VIN number against the DVLA database. They dont check the car or the repair. Its all done in about 5mins and then they hit you for about £40 !!!

I think it was 41 quid for the VIC in the end. Still at least I don't pay for a replacement v5 on top.

Anyway, vic was passed and car is taxed thanks to Bristol's dvla office, so I have a road legal rocco again!

So after being able to use my car for 24 hours now I've found a few things that need sorting out.

Gearshift is a bit stiff and needs more work on getting it aligned so 1st and 2nd are in the right place.
Tracking and camber.
Tyres - Continentals I've got doing nothing need to go onto my Borbets so I can have 4 matched good tyres.
Ignition timing and fueling - Not entirely sure what advance its running and I think it's running too lean at present.
Setup the throttle body so it always returns to idle instead of sometimes stalling at junctions when the ISV doesn't catch it.
Get the steering wheel on straight - its miles out and annoying the hell out of me.
Valet it - get the sand and dust out the carpets and clean the glass on the inside.
Bodyshop to sort out a dry spot and run in the paint and mop it.

After that maybe I can start looking at improvements to how it looks in the engine bay and maybe fit a cruise control system I've got around somewhere.

Fantastic work from start to finish, a really good thread and an inspiration

The Autoad wrote:Fantastic work from start to finish, a really good thread and an inspiration

Cheers fella, I've still got a lot to do that you can't see!

A bit of an update as I've had a quiet bank holiday weekend and I'm avoiding taking the head off the 205 although I've finally got all the head bolts out without snapping any!

The Continentals off my 205 are finally fitted to the Borbets so I have decent tyres on the car again.
Camber on the front wheels adjusted so I no longer have positive on the driver's side.
I've setup the ignition timing with a strobe using the flywheel TDC mark, It was only a couple of degrees out at idle but has got rid of the very annoying flat spot from 1800 -2300 rpm and the car now really flys!
Original indicator stalk replaced with a chunky mk2 2 golf item as it had become very sticky and wouldn't always cancel properly.
Steering wheel straightened up.

Anyway, some before and after photos - she needs a wash already! 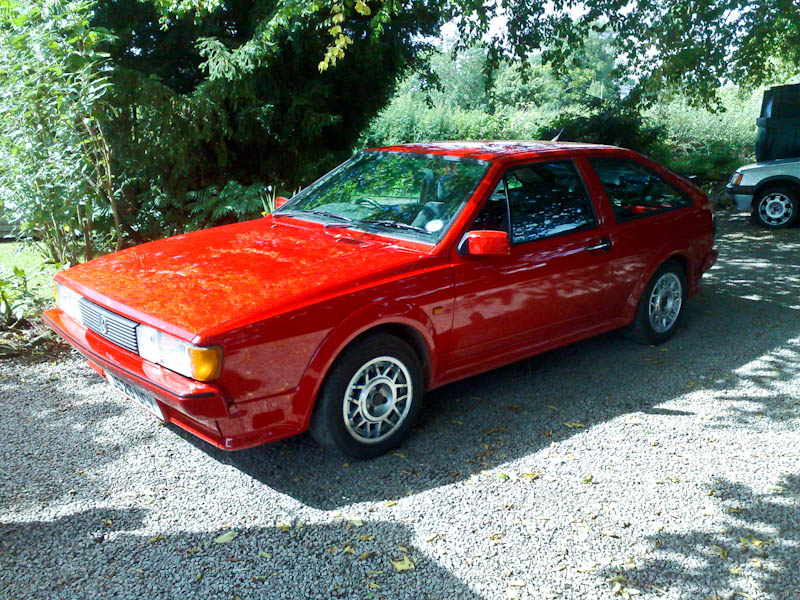 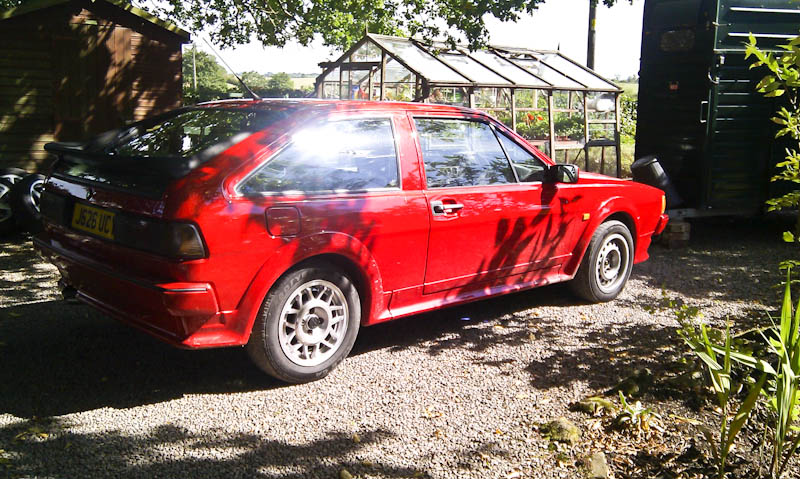 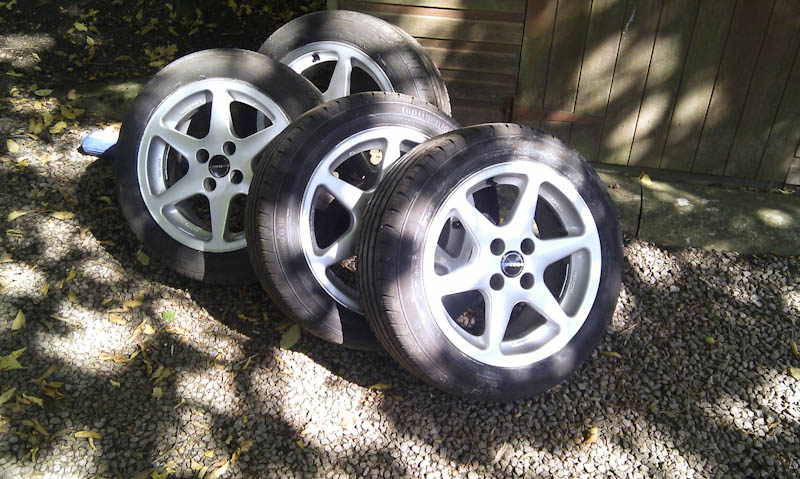 Cleaned and polished up a bit 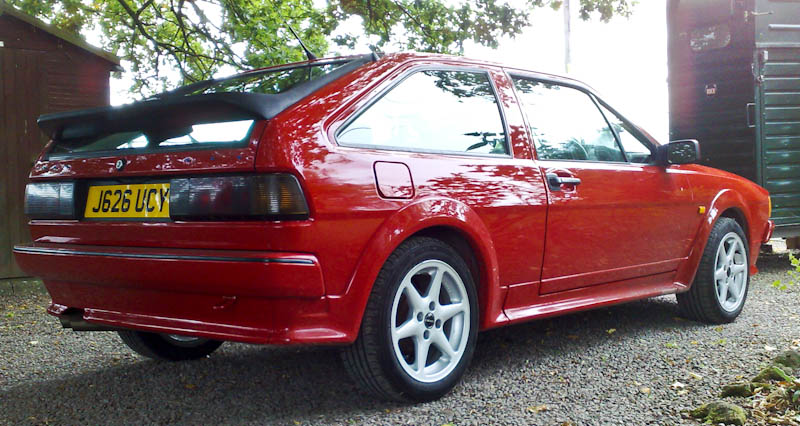 Nothing new to add but the eagle eyed among you may have spotted my car moved from a nice big light workshop to a small dark one while fitting the body kit. I just didn't want to post this on the interwebs until I got my car out of the area. We had to move everything out quick as a bunch of pikey types targeted the warehouses at least twice if not 3 times over one weekend.

The first lot tried kicking the front door in around half six on a Friday evening, fortunately Ant and Claire were there and working on her Golf and heard them trying to get in. Managed to get the reg of the blinged up polo the 3 kids were in. The driver was later arrested the same night.

The second and possibly third lot got in late Sunday night as we were there until 8 that evening and back again by 9 the next morning. Unfortunately they got in and past the stacked pallets put infront of the doors. This time lots of stuff either got stolen or moved around plus beer cans and bottles of blue WKD everywhere showing signs of a party. Loose wheels had been rolled around into the adjoining warehouse, walls and floor graffiti'd along with Ant's Subaru. They had all the radios out of the various cars being stored there.

Socket sets, air tools and allen keys all went missing along with most of the copper pipe out the toilets, thank god the water didn't work! Strangely whoever it was didn't take the entire roll cab of tools. 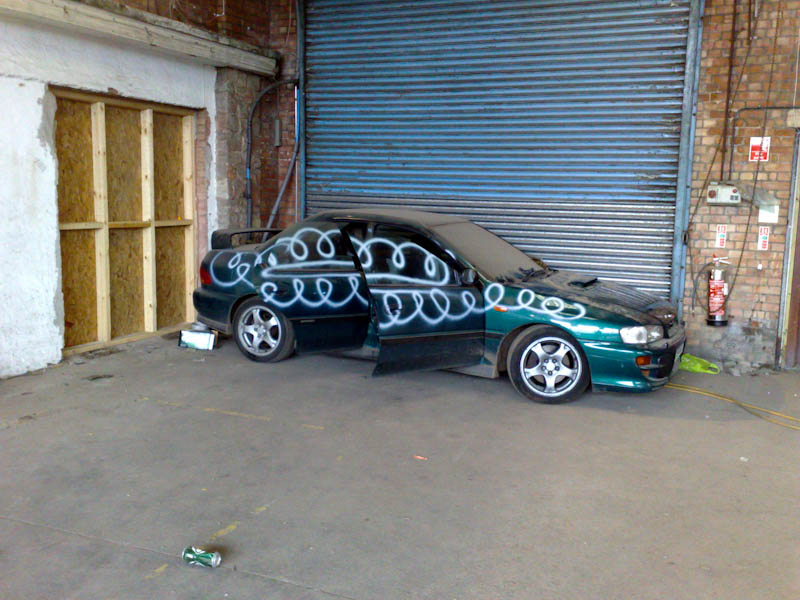 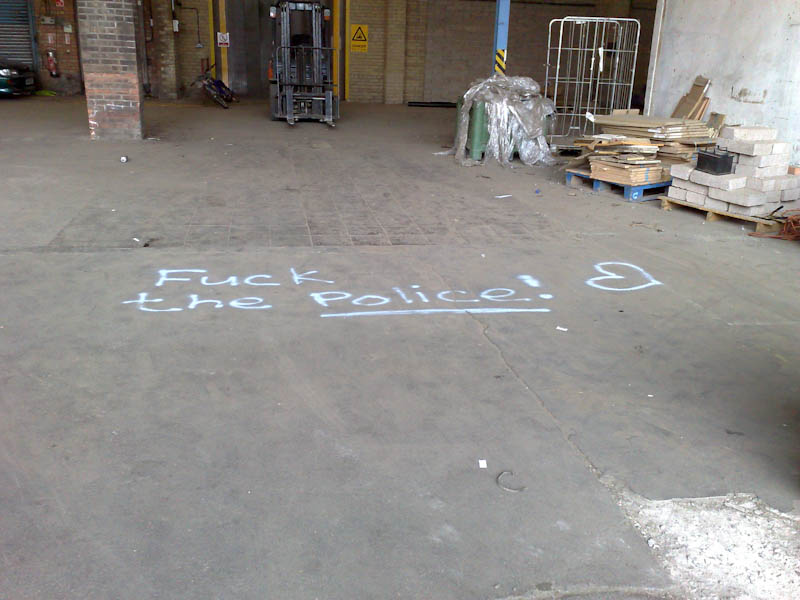 Strangely whoever it was hadn't damaged anything of real value, they had gone through the rocco and pulled the old sony head unit out then left it, no damage to any of the paintwork or bodykit sat on the floor next to it, the keys were even still in it!
Claire''s Golf hadn't even been opened and the front wings and BBS kit was also sat on the floor untouched. The only thing they happened to stand on was her bonnet which on top of some pallets that they stood on to spray a wall.
Last edited by Tim_R on Sat Oct 05, 2013 9:28 pm, edited 1 time in total.

It's been a while since I updated this, mostly because the car hasn't developed any nasty problems since it came back on the road.

Time to have a look at the alarm wiring as the indicators haven't been flashing to tell me its locked and unlocked plus the alarm would rearm even after opening a door. So out with the alarm wiring diagrams and a multimeter.
Indicators I tracked back to a blown fuse in the feed to the alarm and the door switch wiring has a section of magic string missing. If I can get out with the soldering iron and heat shrink before dark tomorrow I'll stop be able to stop setting my alarm off by accident.

Tim_R wrote:We had to move everything out quick as a bunch of pikey types targeted the warehouses at least twice if not 3 times over one weekend ...

Gutted to hear about this, but at least they didn't clear you out entirely.

Cpt Custom wrote: Gutted to hear about this, but at least they didn't clear you out entirely.

There was a massive uncertain moment when walking across the adjoining warehouse to find wheels scattered about where they shouldn't be and wondering what we were going to find.

I was really sorry to see what happened to you as I was looking forward to seeing your car progress, even worse that you haven't had news on getting anything back.

Good to meet you again yesterday Tim, impressed with the work gone in to getting Jucy back on the road from looking at this thread

It was good to see JUiCY in the flesh on Sunday. Nice job.

^^Cheers guys, it was good to get the car out to something this year.

No real problems going to Beauliea and back which was the first long run I've done in the car since it's rebuild.
Monday morning was a different story though, the car was very difficult to start and mostly running on 3.5 cylinders. After much prodding and head scratching iI've traced the fault back to plug no 1. Having taken it out, glared at it and put it back everything is back to normal. Very odd!

Well the car is finally going back to the paint shop this week for minor corrections and a final polish up. Then i can refit the the badges and roof strips and give the paint a good coat of wax to protect it.

Fixed a major annoying squeak from the boot lid rubbing on the seal this weekend, but now I can hear all the other smaller ones around the cabin so will have to spent some time hunting them down.

Things still to do:-

I realised I've not updated this for a while mostly because I've been trying to get the head gasket done on my 205 which has taken me far more time than expected. If I can get that running reliably this Saturday I'll spent some more time on the rocco again and tackle my todo list.

So anyway, I got her back from the paint shop again at the beginning of November after being touched up where needed and mopped. The tail gate badges fitted and gutters waxoiled and roof trip strips to finish it off, then washed and a full wax to protect the new paint.

Celebrated this by a quick trip up to see the November 5th fireworks at Crystal Palace and the car behaved itself there and back, although a lighter clutch and gearchange wouldn't go amiss for London traffic jams.
Gear change has since been fixed with some silicon spray grease but can't seem to do much about the clutch, which has a new cable and was lubricated when fitted, it's never been what could be called light in this car.