Of course. She really likes "wiping."

Not quite finished, but close enough to be on display at the NEC Classic Car Show last weekend. More photos will follow in due course.

With the unparalleled efforts of Ant "The Autoad" Thomas at Rust Republic, who did nearly all of the hard work, we've managed to create a very close replica of a 1976 VW Scirocco Junior Cup car. If you don't know about this one make, promotional series, look at Dr Dub's excellent site for your background reading (Richie was also a mine of useful information for the build of this car, without whom it would have been a lot trickier). http://website.lineone.net/~dr.dub/scir ... or_cup.htm

The basis of the car is actually the shell of a 1981 GLi, with the engine and some other mechanical bits pilfered from a rotten Storm. Matt Curtis (GT Matt) did a great job rebuilding the engine. We took the decision to convert it to left-hand drive, since no Cup cars were RHD. Marshall (Shavhead) helped with the bits needed to relocate the steering wheel and Johan de Haan (via the Facebook page) came up trumps with a decent LHD dash and all the associated bits. Ant generously supplied the wings, lights and bumpers to make it look like a 1976 car. Tony (mazellan) had the Zender wheel-arch kit and front spoiler, with the rear spoiler found on eBay.de. German eBay also came up trumps with the correct Interspeed Victor steering wheel and boss (from separate sellers!), black instrument surround, and so far only one side's correct door card. The interior fabric would have been too costly to replicate, so the seats were completely refurbished and finished in mk1 Golf GTI red stripe fabric, which provides a similar effect and the fabric is still available (I found werk34.de to be cheapest at the time). VW Classic now reproduce the correct Kamei golf ball gearknob, so we had one of those.

I settled on a Safety Devices bolt-in roll cage, which they make for Mk1 Scirocco. Other racing kit, such as proper race seat, harness, fire extinguisher, electric cut-offs and bonnet pins have yet to be fitted. The suspension on the original cars was slightly lowered on Sachs shocks. Since these are no longer available, I went for Koni on-car adjustable shocks, with Eibach lowering springs (we tried standard springs first, but it looked too tall). Otherwise suspension/chassis is stock GTI. After a lot of eBay searching, I found a set of four correct 15" x 5.5J ATS Cup alloy wheels. Then I found an even cheaper set of five. All nine were refurbished at Pristine Wheels in Woburn and the best five (all with the VAG stamps as well as ATS) are on the car. I wouldn't normally buy Pirelli tyres, but the original Cup cars were raced on P7s, so I felt obliged to fit Pirelli Cinturatos, which are the only ones you can get in original spec 195/50/15 nowadays.

I plan to get the finishing touches to the interior and racing mods finished over the winter, plus a professional suspension fettle and tune-up, then take it to selected track days and hillclimb/sprint events next season. It would be completely outclassed in any historic touring car championship as it's basically a standard 1.6 GTI, plus I don't want to have to rebuild it because some other idiot crashes into me. If it's my own fault, it's a different matter.

Enough chat for now. Here are some pics: Do you find much difference in the brakes without all that linkage or have you not been able to test them out yet?

I drove it gently the one time I've taken it out, so can't comment much on the difference in the brakes between RHD and LHD.

I'll see how things go once we're up and running properly.

That said, I've always felt that in a well-maintained system the brakes are perfectly good in RHD cars.

I agree will you on the brakes, I also don't have a problem with the brakes, I recon it's because I drive either the Scirocco or Mk1 Golf as a daily so the brakes feel fine and I'm used to the amount of effort needed to slow the car down.
I just have a problem getting into newer cars with over servo ed brakes as I have to be careful not to brake to hard and throw everything at the windscreen

Let us know how you get on.

Did I miss the build thread on this or am I being stupid? Love the fact its a joint effort! Looks great and sounds like it's going to be driven hard too. We need some more pics though....as usual!

Didn't to a build thread because:

1) I wanted to keep it secret until it was finished, and

I have some photos from the build that I'll post up later.

Had my first car-park chat for a while today when I was at Waitrose (I know, posh) in my GTX. Nice chat with a man who has a black GTII and also knows a lot about Jon's RE2000 "Red Shed" as he knows the original owner who had the conversion done.

Realised I actually have business use for my insurance, so taking the GTX to work this week.

Getting ready to take the Junior Cup car to Ultimate Dubs. Already cost me £100 in poncy cleaning equipment (not usually inclined to do more than a wash and polish). All those vinyl decals are going to take some looking after, especially the printed ones; I think a non-abrasive glaze is going to be a better idea than polish, then a sealant rather than a wax. I never knew these things existed until now. I hope Newton Commercial pull their fingers out and get my new parcel shelf delivered before the show.

Here's a link to a more professional photo of the car at the NEC. out of curiosity why does the wiper park on the passenger side?
from this angle it looks like it would miss a large chunk of screen on the drivers side?

Well, in LHD it also parks on the passenger side:

And the same is true of mk2 Sciroccos, with twin wipers: 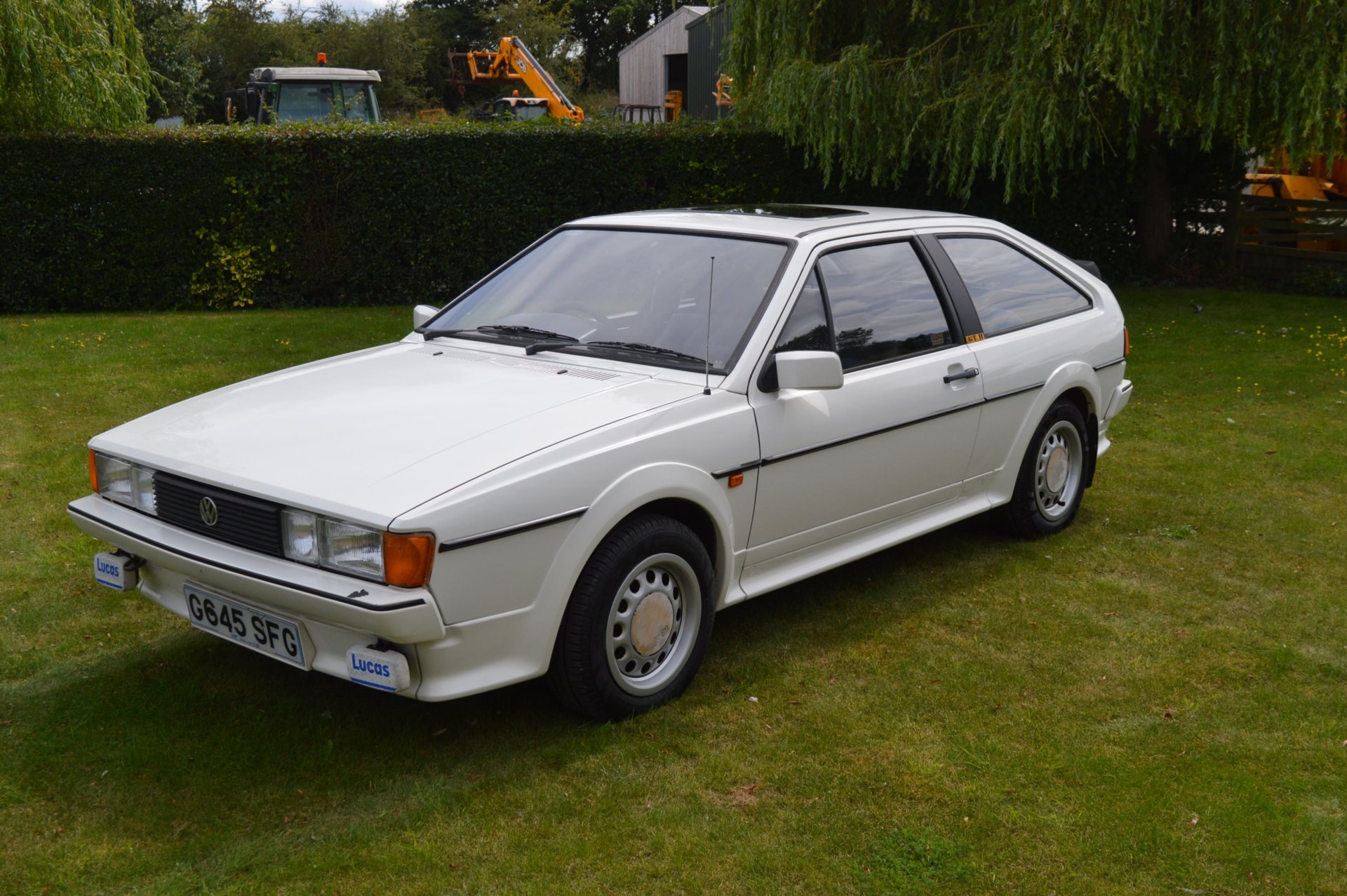 but the second wiper on mk2 fully clears the drivers view, this is why they sit the way they do so the drivers wiper meets right up with the drivers a post in the vertical position clearing the maximum field of view.
seems odd as the single wiper version wont be able to do that.
wont it leave a diagonal line accross the bottom edge of the screen on the drivers side untouched?
or does it go fully horizontal left to right to cover the whole screen leaving the top corners untouched both sides?

It does leave a section unwiped, but I think the idea is that the wipers are meant to park out of the straight ahead field of vision.